Randell Tiongson: From Brunch to Riches at CBTL

Last November 02, 2011, the official Facebook fan page of The Coffee Bean and Tea Leaf released an invitation to an event. It was an invitation to one of their events entitled “From brunch to riches: New financial habits for a brighter future” which is basically the first of a three-part brunch series (Small Talks for BIG Changes) by the said establishment.
Small Talks for BIG Changes is a brunch series that is a part of the brand’s Great Exchange Program, an on-going trade-in event that highlights The Coffee Bean and Tea Leaf’s new Single Serve Beverage System known as CBTL.

It is no wonder that when we were at the event, the barista even encouraged me to make my own drink. I chose the Tropical Passion tea capsule, and seriously, it only took me one touch to be able to make my own tea beverage. It was certainly a piece of cake! (For more information about CBTL, go here.)
We were served food, thus giving more conviction to the term “brunch”. I have to say that I enjoyed the food selection that was brought to us. 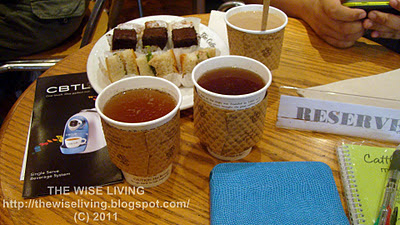 The talk was a great hit! Mr. Randell Tiongson started his talk by citing one of my favorite authors, Dave Ramsey. He quoted, “Money matters deal with 80% behavior and 20% wisdom.” And I have to say that I personally agree. Wisdom is only in vain if we never implement what we learn. What’s the use of reading financial books when we live above our means, anyway?
He continued by saying that the Philippines is stuck in a 1st world consumerism while having 3rd world income. And really, friends, wouldn’t you agree with him, too? I was unfortunate enough to be stuck in this mindset when I was younger that I was able to do some reckless spending. Oh, those were the days!
Basically, we don’t really have a big problem with “creating” our income. “Holding on” to our income is the problem. And how can we solve that? By following the 70-30 rule: Invest and save 30% of your income and spend the remaining 70%. 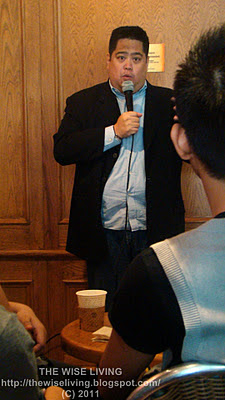 Does that sound simple to you?
It sure is simple!
The only problem we have is discipline. And by utilizing control, I believe all of us can be financially stable.
The event was really a blast! Of course, being me, I had to end it with a picture. A picture paints a thousand words, remember. 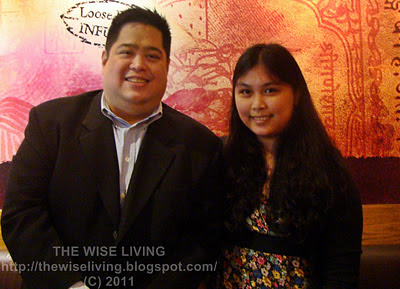 To go to the next two installments of the brunch series, be at Burgos Circle – Fort Bonifacio on November 12, and at Shangri-la Mall on November 19.
See you there!
Earn MILLIONS in the stock market by CLICKING HERE now!

3 thoughts on “Randell Tiongson: From Brunch to Riches at CBTL”

Want to advertise on The Wise Living? Or thinking of hiring me for a speaking engagement? Please email me to receive our media kit or speaker profile. Email: lianne@thewiseliving.com